Unfortunately, ketamine abuse is increasing across the board, which means it is increasing among young adults and college-aged individuals as well. If you or someone you care about has been using this drug recreationally, it may be time to seek treatment. Call 800-601-3889 (Who Answers?) now to find a rehab program that will cater to your needs.

Where is Ketamine Abuse Increasing?

According to a 2011 study from the Journal of Substance Abuse and Rehabilitation, “The increasing abuse of ketamine” has been problematic nearly across all types of drug users.

Initially, the drug was used as a recreational substance to help individuals experience an intense, out-of-body state known as the k-hole at parties or raves, but recently, individuals have begun to abuse the drug at home and even during their workdays.

As this is happening around the world, it has pushed many governments to create stronger restrictions on the drug.

These increases in ketamine abuse especially include young adults, as this is the population most likely to use the drug in clubs for its dissociative effects and, eventually, to succumb to addiction.

What Else is Causing the Rise of Ketamine Abuse Among Young Adults? 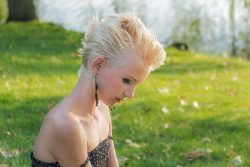 The recreational use of ketamine can quickly spiral into an addiction.

Often, ketamine is sprinkled on marijuana or tobacco cigarettes to increase the effects of these drugs. Sometimes, users do this purposefully, but many individuals do not realize they are taking this more intense substance, causing them to experience side effects they are not expecting (Drug Enforcement Administration).

Also, those who do use ketamine knowingly often do not realize that the drug has addictive properties. This has helped lead to the increase in use as well. Ketamine abusers may believe their use of the drug is harmless before they begin to experience

In addition, users are also known to binge on the drug, which is a behavior that is common among amphetamine and stimulant addicts (NIDA). The drug can cause a fatal overdose as well if taken in large amounts, but again, many younger users do not realize this.

Ketamine has certain properties, including the ability to cause muscle weakness, numbness, loss of touch with reality, and amnesia, that have helped turn it into a drug utilized for the purposes of sexual assault. This has also increased the abuse of ketamine among younger populations and has created dangerous results.

Decreasing the Abuse of Ketamine