The dissociative anesthetic drug ketamine can be used in a number of ways, some of them legal, some illicit. Although the drug can cause many desirable side effects for recreational users, it is unsafe to take it in any way not prescribed by a doctor as it remains “a schedule III controlled substance in the US” (NHTSA). 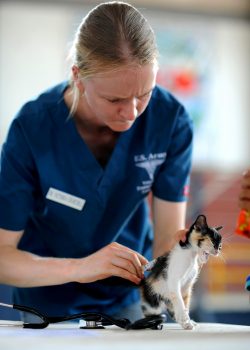 Ketamine is often used in animals as a tranquilizer.

In the past, ketamine was used commonly as an anesthetic, often in wartime situations by battlefield medics (CESAR). Soon after, though, it was noticed that the drug had dangerous side effects and that many individuals were attempting to abuse it in high doses. Therefore, medicinal use was scaled back.

Today, ketamine is “primarily used in veterinary applications as a tranquilizer” (NHTSA). However, it is still has medical applications in certain situations involving human patients. The drug is not completely unsafe and, in certain doses and when used on specific individuals, it can be quite harmless. According to the NCBI, “ketamine is a safe and effective sedative agent for use in children requiring immobilization to enable performance of a painful procedure.” Elderly patients are also given the drug in some instances for the same reason.

Ketamine can be used safely but, much like the prescription form of methamphetamine, it is not prescribed by doctors in many instances because of its high abuse potential.

Ketamine is abused illicitly and often in high doses because of the extreme side effects it causes. Most people who abuse ketamine in this way are teenagers and young adults. According to the DOJ, “Individuals aged 12 to 25 accounted for 74 percent of the ketamine emergency department mentions in the United States in 2000.”

The drug causes intense euphoria when taken in high doses as well as impaired motor functions, derealization, and hallucinations. Most recreational users crush and snort it or, in some cases, take it orally. “Though it can be injected, the rapid onset of effects from oral or nasal use makes it more convenient and marketable than the injectable forms.”

One of the most dangerous side effects of ketamine (and the reason many people abuse it) is the k-hole: an high that users describe as a near-death or out-of-body experience. Because the k-hole occurs when a person is extremely intoxicated, it often is the precursor to overdose. Ketamine overdose can be deadly, which is why it is so dangerous to attempt to experience the k-hole.

In addition, the drug causes confusion, numbness, weakness of the muscles, and coordination problems. Individuals often experience impaired vision and muscle rigidity as well. This leaves users in an extremely vulnerable state, which is why ketamine is often used to facilitate sexual assault. An individual might slip the drug into someone’s drink, causing their victim to experience these debilitating effects without knowing what is happening. Often, a ketamine high also causes amnesia which is another reason why it is abused in this way.

Ketamine can be used safely and beneficially when in the hands of doctors and nurses. However, the drug causes severe side effects, a dangerous state of vulnerability, and even addiction when abused over a long period of time. Therefore, ketamine can only be used safely in a clinical situation.

If you abuse ketamine and need help finding treatment, call our helpline today at 800-601-3889 (Who Answers?).