The history of Ketamine is well known and dates back to 1962 when it was first synthesized by American scientist Calvin Stevens at the Parke Davis Laboratories. As the history of Ketamine began, it was initially named CI-581 and developed as a derivative of PCP, synthesized in 1926, as an anesthetic drug which acts, primarily, as an NMDA receptor antagonist. While these drugs are fast acting anesthetics, they are also considered hallucinogens and are more dangerous than other categories of hallucinogen drugs. The history of Ketamine, for medical applications, began as a replacement anesthetic for PCP which caused long lasting and severe hallucinogenic effects upon recovery of consciousness and was not suitable for humans because it often presented other psychotic symptoms such as delusions, deliriums, and even psychosis.

The pharmacological history of Ketamine, as a veterinary anesthetic, began when it was patented in Belgium in 1963. Subsequent testing on humans began in 1964 where it was found that Ketamine produces minor hallucinogenic side effects and had a shorter duration with less psychotomimetic effects than PCP. In 1965, it was determined that Ketamine could be a safe anesthetic to administer to humans and throughout the history of Ketamine it has been proven to have many valuable applications in medicine. Today, it is used as an anesthetic for children or individuals undergoing minor surgeries, but its main purpose is for veterinary use because of the hallucinogenic effects it may produce in humans. Also, in 1965, the first known account in the history of Ketamine for recreational use was noted by Professor Edward Domino where he described it as a potent psychedelic drug and for which it was termed as a “dissociative anesthetic”. As a dissociative anesthetic, Ketamine and other drugs such as PCP and DXM, distort the user’s perception of sight and sound, while producing illusions of detachment from the environment or one’s self. These symptoms can be prolonged and create psychosis and have been associated with resulting schizophrenic and other psychotic disorders, while the history of Ketamine use by medical professionals has been deemed safe. 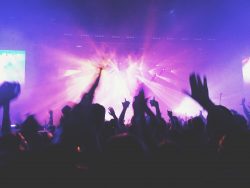 Ketamine has been used as a club drug since the 1980’s.

After being patented for human and animal use in 1966, by Parke-Davis Laboratories, Ketamine became available, by prescription, in 1969, in the form of Ketamine Hydrochloride and under the name of Ketalar. It was officially approved for human consumption by the United States Food and Drug Administration in 1970 and was administered to soldiers during the Viet Nam War as a field anesthetic. The history of Ketamine shows that, as interests around the world increased through the mid 1970’s, Ketamine was used for both recreational and therapeutic purposes. Argentina began using it as a regression therapy and sub-cultures began using it illicitly for mind exploration and New Age spiritualism. Medical and nonmedical uses of Ketamine expanded throughout the 1970’s and 1980’s as experimental uses became more common. The history of Ketamine use, for nonmedical purposes, began to be documented in underground literature, such as The Fabulous Furry Freak Brothers. Psychiatric and academic researchers published other literature regarding Ketamine usage and the effects of Ketamine intoxication for exploration of the inner psyche and other altered states of consciousness. The popularity of recreational Ketamine usage rose with the publication of two books in the late 1970’s, describing personal accounts of its use: ‘Journeys Into the Bright World’ by Marcia Moore and Howard Alltounian, and ‘The Scientist’ by John Lilly.

In the history of Ketamine, through the 1970’s, and continuing through the early 1980’s, Ketamine became increasingly available for illicit use via capsules, powder, tablets, crystals, liquids and other injectable solutions found in the illegal drug markets. The history of Ketamine use for illicit purposes continued to evolve as other ingredients were added to the drug altering its effects. A common example of this is the drug known as MDMA, or ecstasy. This drug is also known as the club drug and since the mid 1980’s, it has been linked to a variety of dance cultures. The history of Ketamine use at parties and raves has elevated the use of Ketamine and drugs such as ecstasy today, than when it was first introduced in the United Kingdom where partygoers took a pill form of Ketamine and thought it was ecstasy. Often, Ketamine is sold as ecstasy but it is different because of its anesthetic properties which can cause slurred speech or immobilization. More history of Ketamine has, increasingly, shown it to have become part of the “post-clubbing experience” and usage continued to rise through the end of the century. History of Ketamine uses, for these purposes, has proven the drug is considerably dangerous to the abuser and may cause brain damage, neurological problems, or death. By the end of the 1990’s, the most rapid rise of Ketamine abuse was in the Hong Kong dance culture where, since 2000, it has been regulated as a Schedule I drug under Hong Kong’s Chapter 134, Dangerous Drugs Ordinance.

Are Ketamine Side Effects Dangerous?

For more information on Ketamine, or for help finding an addiction treatment program, call 800-601-3889(Who Answers?).