When you hear of the words ‘animal tranquilizer’ the first thing that comes to mind likely isn’t ‘I wonder if I would enjoy taking that?’ Generally something that is good for animals and used for veterinary purposes should stay that way. However, in the case of Ketamine, this is not always the case.

Ketamine is a dissociative anesthetic that was formerly used on humans as the induction agent for diagnostic and surgical procedures, according to the Drugs and Human Performance Fact Sheets. Though the drug still does have valid medicinal uses for anesthetic purposes, its potential for abuse is so high and its effects so dangerous that it must be tightly controlled. After being abused quite a lot, ketamine was reclassified as a Schedule III controlled substance in 1999.

Despite being made illegal and having its approved medical uses greatly tightened, ketamine abuse is still very common on the club scene and otherwise. It is baffling to many people why and how a drug that is primarily considered an animal tranquilizer is attractive to people for recreational purposes. 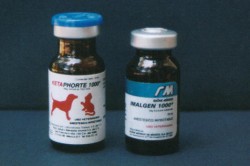 Ketamine’s liquid form can be injected, though the powder form is more popular on the club scene.

Ketamine is usually injected or snorted, though in the club scene snorting seems to be the more popular method of use, according to the National Institute on Drug Abuse. The drug is not easy to manufacture, and so most of the ketamine found on the streets has been stolen from veterinary hospitals or pharmacies.

Though the addictive potential of ketamine is not considered to be extremely high, it has been known to produce tolerance and cravings. In addition, people who use ketamine are known to binge, taking many doses of it in a single event in a similar manner to cocaine.

What Does Ketamine Do?

Ketamine distorts the user’s perception of sight and sound and produces feelings of detachment – both from the person’s surroundings and from their own self, according to the Center for Substance Abuse Research. It may also have the effect in some people of producing illusions or hallucinations.

While users generally take the drug for the above effects, ketamine also has some serious unwanted side effects. Individuals under the influence of the drug may be put into a severely confused or helpless state where they can be easily taken advantage of. In severe cases, users may fall into a temporary k-hole. Ketamine overdose is also possible in high doses.

Some of the dangerous effects of ketamine that users may experience include:

Ketamine is considered dose-dependent, which means that the more you take of it the more intense the effects are. In higher doses users may experience what is called a k-hole, which is a very dangerous and unpleasant ketamine high. It is reached when the user is on the brink of full sedation and is likened to an out of body experience, or even a near-death experience. It can be accompanied by respiratory depression, muscle twitches, slurred speech, vomiting, nausea, and/or muscle rigidity.

People report different experiences with k-holes, but the prevailing theme is that it is a fairly terrifying state that you are unsure at the time will ever end. Others, though, believe that they are doing many things, such as going out and dancing, when in fact they are completely unable to move for hours.