Though nowhere near as publicized as heroin or prescription pain pills, ketamine can quickly disrupt a person’s ability to manage daily life affairs. As one of a handful of dissociative-type hallucinogen drugs, ketamine produces a range of effects depending on the dosage amount used. Though not as addictive as opiates or stimulant-based drugs, ketamine abuse practices do come with certain risks, both physical and psychological.

Commonly used as an anesthetic for veterinary purposes, ketamine belongs to the Schedule III class of controlled substances and is normally distributed as pill or a powder. According to Pennsylvania State University, ketamine has an elimination half-life of two hours so the body metabolizes this drug fairly quickly. Whereas small doses of two to 10 milligrams typically produce hallucinatory experiences, large doses of 50 to 100 milligrams can place a person in a comatose state.

Ketamine acts on several of the brain’s neurotransmitter systems at once, which accounts for its ability to produce “out-of-body” experiences. Ketamine stimulates neurotransmitter production from individual brain cell sites, placing a considerable strain on the brain’s functional capacity over time once ketamine abuse practices take hold. Before long, these cells become less responsive to the drug’s effects, so users end up taking increasingly larger doses in order to experience the desired effects of the drug.

Not unlike the bingeing practices characteristic of cocaine abuse, ketamine abuse can also prompt bingeing behaviors simply because of how quickly the brain adapts to the drug’s effects. After a certain point, no amount of ketamine will produce the desired “high” effect that it once did. For people who’ve used the drug for months at a time, this ketamine abuse practice not only overexerts brain functions, but can also have lasting effects on their emotional and psychological health. 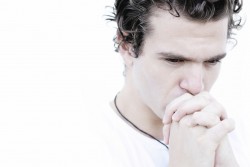 Anxiety and restlessness are often experienced when you have a ketamine dependence.

While ketamine doesn’t typically cause physical dependence, ongoing ketamine abuse can open a person up to the drug’s addiction potential, according to the National Institute on Drug Abuse. In effect, a psychological dependence takes root once a person comes to believe he or she needs the drug’s effects to cope with daily life, which ultimately defines addiction. In the absence of a needed “fix,” a person will likely experience one or more of the following symptoms:

Ketamine’s hallucinogenic properties have become a sought after experience with the bar and nightclub scene. Unfortunately, this drug’s anesthetic effects can leave users completely helpless and vulnerable. Consequently, ketamine has become known as a “date rape” drug due to incidents where victims were rendered totally incapacitated after unknowingly ingesting the drug.

While harmless enough when used on an occasional basis, ketamine’s effects on the brain make it difficult to maintain control of one’s usage patterns. Once ketamine abuse practices take hold, the likelihood of a developing addiction increases with each passing day.

If you or someone you know struggles with ketamine abuse and have more questions, please feel free to call our toll-free helpline at 800-601-3889(Who Answers?) to speak with one of our addictions specialists.